Every year, right before Thanksgiving, airports across the country get breathless phone calls from local media outlets. Reporters have one question. "How will passengers cope with the huge, monstrous crowd of holiday fliers?!" 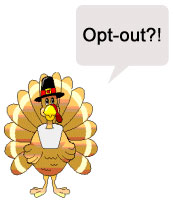 You've seen or read this news story a thousand times…it goes like this: "Airports across the country are bracing for a huge rush of Turkey Day fliers." Then we see a telephoto camera shot that makes a line of ten people look like 50. Then there's a quote from a frazzled traveler. “OMG, I almost missed my flight because of the long line!”

Chances are this frazzled flier is an infrequent flier who wouldn’t know a short line from a long line because they don’t fly enough to know any better. Besides that, they may have arrived at the airport late and they don’t know the drill — they don’t know where to park, where the ticket counter is, or how to get through security in a timely fashion.

None of that matters. The Turkey Day Travel Rush story is true because the media says so. The telephoto shots prove it. The frazzled flier proves it. Everyone knows it’s true because it must be. The story has passed into News Myth.

Now let’s take this News Myth and throw in those new TSA security procedures. Here’s how they work. TSA now has an imaging technology called backscatter x-ray. It’s a whole body scanner that is supposed to detect explosives, weapons, etc.

At airports where TSA has backscatter machines, fliers are generally given two choices: be scanned or submit to an “enhanced” pat down that includes touching your private areas. In airports where TSA doesn’t have a backscatter machine, fliers are randomly picked for the pat down. Some people don’t consider this much of a choice — be exposed to x-rays, or submit to a pat down, with "enhancements."

Before Thanksgiving several up-set fliers called for civil disobedience. The outcry culminated in a call for everyone to “opt-out” the day before Thanksgiving. The intent was that all fliers would refuse the backscatter machine and the pat down. Clog up security lines! Bring the Turkey Day Travel Rush to a grinding halt!

By the Monday before Thanksgiving, media outlets were in a froth. Between Monday and Wednesday, this airport received no less than ten phone calls from Springfield media outlets. We had nothing to tell them. It was like any other Wednesday — no huge crowd and no security protest. Nationally, a reporter for the New York Times described it best:

“By midday Wednesday, a forlorn CNN correspondent was wandering around during a live shot with nothing to report, with a nearby keening baby the only indication of terminal rage. No word on whether the diaper was breached. The pat-down story was the equivalent of vaporware — it seemed as if something huge was about to happen, but it turned out that it was a story about a story, the noisy, fervent sound of a news system feeding on itself.”

As astute as this Times reporter/news critic was, he still insisted that the Wednesday before Thanksgiving is “one of the busiest travel days of the year.”

And yet another airport Thanksgiving has passed into News Myth….