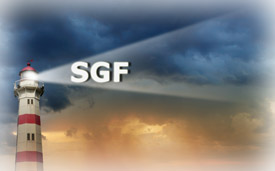 Chances are you’ve never thought of an airport as a place to seek aid and comfort. But sometimes that’s exactly what it is.

Think of it this way: airplane passengers are travelers in an ocean of air. If something goes wrong they need to find the nearest island. That’s what an airport is — an island in the unforgiving ocean — a safe haven.

We never know when a plane might pop out of the clouds over Springfield needing assistance. It happened this morning.  At about 10:40 the alarm sounded: a Southwest Airlines’ plane was ten miles out and headed our way — a passenger was having a heart attack. The 737 had been flying from Chicago to San Antonio. Now, it was diverting to SGF.

Of all the airports along the path, why choose SGF? Because the airlines know what most people who live here don’t — SGF is the best-equipped airport in the region. We have 17 full time aircraft rescue firefighters (ARFF) and state-of-the-art firefighting equipment. On average we respond to 50 aircraft and medical emergencies a year. Our well-equipped ARFF, combined with the airport’s long runways, and central location, make SGF a primary “diversion airport” for American Airlines. If an American flight has mechanical problems over the central United States, there’s a good chance it will divert to SGF for an emergency landing. These are the things the airlines know about SGF.

About ten minutes after the alarm sounded the 737 bore down on Runway 14/32. After landing it made a quick dash to Gate 2 where Airport medical personnel were waiting; an ambulance from Cox Hospitals was just minutes away.

As far as we know this story has a good ending.  The patient was alert and conscious.  His wife followed the gurney to the ambulance, and, as far as I could tell, was in good humor (considering the circumstances).  It’s hard to imagine what it must be like… One minute you’re winging your way to San Antonio, the next thing you know you’re grounded in unknown territory. And sick to boot.

Meanwhile, schedulers at Southwest were busy adjusting flight times and crew schedules. The flight crew readied to sail as more fuel was put onboard. Passengers peered out the windows and were undoubtedly checking their watches — impatient to leave our safe haven. San Antonio would have to wait a bit longer.