Airport to Reach Milestone This Week

Sometime this week the one millionth passenger of the year will use the Springfield-Branson National Airport (SGF). It’s the first time in history that that many people have used the airport is a single year. Civic leaders and airport customers gathered at the airport Thursday morning to celebrate.

“Since actual passenger numbers won’t be available from airlines until mid-January, we asked the math department at Missouri State to do a statistical forecast to help determine as close as possible which day we’ll hit one million,” says Brian Weiler, airport director. “This is the day picked to celebrate and we want to thank the community for the support that made this happen.”

A million passengers a year is a milestone not only for the airport, but for the community. It’s a symptom of a growing region, and a strong local economy — since 2013 SGF passenger numbers have grown 40%. 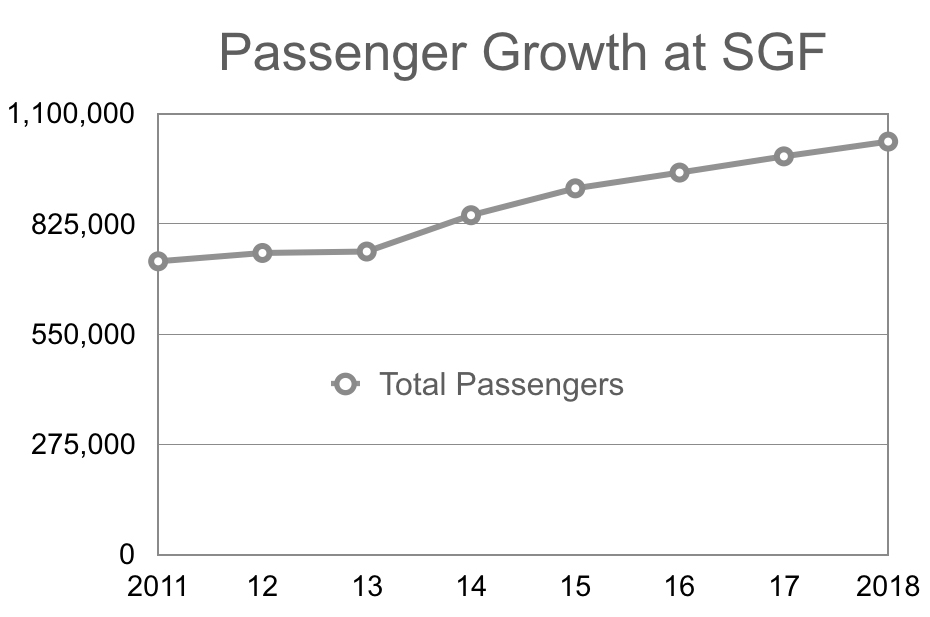 Nationally known aviation consultant Michael Boyd says it’s no surprise that SGF will eclipse the 1-million mark this year. “Nationwide, air passenger growth will increase 5.5% in 2018. Springfield will be at almost double that rate. The reasons are simple – a vibrant economy and an aggressive airport.”

He thinks expansion will continue in 2019.

“All the ‘vital signs’ for air traffic growth are in place at Springfield – excellent access from the rest of the globe via six major airline gateways, plus outstanding service to key leisure destinations, and finally, very high load factors. All of these tend to demonstrate to airlines that Springfield will be a prime expansion point for the future.”

Load factor is the industry term for the percentage of seats sold on a given flight. So far this year the average load factor is 81%, but was as high as 87% in October with many flights sold out.

Growth is a good thing but it does present challenges. The airport has been busy improving facilities to accommodate the growth and to improve the customer experience.

“Within the last two years we’ve added more than 300 auto parking spaces and 80 computer charging stations. We’ve also doubled the restaurant space in the terminal,” says Weiler. “And we’re planning to add more parking in 2019, along with expanded rental car facilities. Please bear with us during this construction as we grow to better serve our customers in the future.”